A Christmas Surprise at Dragon’s Gap 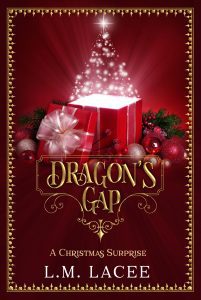 Edith murmured. “You know Reighn will say that dragons don’t celebrate Christmas.”
Sage growled. “And I am saying they do now.”

Well it looks as though Christmas is coming to Dragon’s Gap whether dragons celebrate it or not.

So how much fun can happen with dragons who have no idea what is involved in Christmas.

Join the Dragon Lord and his family and friends and find out how much love, laughter and trouble the people of Dragon’s Gap can get into while they learn to celebrate Christmas.

Edith walked into Sage’s office leaned her hands on the desk and her body towards a startled wary Sage who sat back in her chair. “What! I have not done anything lately.”

Edith sniffed dramatically before saying. “It is November the twenty-eighth.”

Edith backed up and sat in the visitors’ chair as she drawled. ‘Tweenteee-eighthh!”

A crease appeared between Sage’s eyes. “I don’t get what you are implying. Is it someone’s birthday? Oh dear Goddess, is it yours?”

“No… and how do you not know when my birthday is?”

Sage looked blankly at her for a moment then hurriedly asked. “Oh! So the twenty- eighth, what is so important about that date?”

Edith smirked at the obvious attempt to sidetrack her. “Don’t think I won’t remember Lady Sage, now there is of itself nothing remarkable about the twenty- eighth of November.”

“So why are you here yelling at me?”

“Well, not until December the twenty- fifth, you should know that, miss I know dates of all things.”

At Edith’s raised eyebrows, Sage’s forehead creased more, then as the realization came to her it cleared and her eyes widened. “Oh dear, Dragon’s Gap does not celebrate Christmas.”

“What do you mean until now?”

Edith sighed and asked. “Seriously! You are not normally this scatter brained!”

“I know, Ella said it is baby brain.”

“Oh I call bull, I am pregnant and don’t have it.”

“Are you as far along as me and carrying twins? No I don’t think so.”

It was Edith’s turn to stare blankly at her as she wrestled her mind around that. “Shoot… well okay moving on, we need to decide what is happening for Christmas. Sage…” Edith’s voice softened. “We all need this. Home has not been the happiest of places for the last few months. Christmas will show we are on our way to making a community, a family for us all. Some of us need that more than others and truthfully it would be nice to have something fun and happy to look forward too.”

“Wow! You are right, there are some young ones, mine included, who have never celebrated Christmas and there are some like Paige, Kadee and Joy who will be without their birth families for the first time through Christmas.”

Sage stood up. “Christmas at Dragon’s Gap is officially on!”

Edith grinned. “Good so now we just have to work out how to accomplish this and get everyone on board the Christmas train which could be difficult for the dragons.”

Sage smiled, and it was Edith who was the one to look wary now. “What have you thought of?”

“I will talk to Reighn about Christmas.”

“You know he will say that dragons don’t celebrate Christmas.”

“And I am saying they do now.”

Reighn stood on his balcony looking over the meadow, early the morning of the thirtieth of November. Sage stood beside him. “Any minute now.”

“My shadow do you think sending scrolls in the form of exploding messages is the way to announce that we need a special meeting?”

“Oh yes it is the Christmas way.”

“Is this to become a tradition like the hanging of stockings and tinsel?”

Sage had spent the better part of the last two days explaining Christmas to Reighn with movies and books, he had not been impressed until she pulled out the big guns by saying how it would be their first Christmas as a family, then she had him read a Christmas story to Molly and Ava who had become excited about Santa visiting them. She had then explained how much his daughters would love Christmas with their new family, all the family. He seemed to embrace the idea once she assured him all his brothers would have to participate in the holiday as well.

So now they stood waiting for Sage’s spell to unfold or in actuality unroll the scrolls which she had magically sent to each house of their families to announce the family meeting this morning. Excited she smiled up at Reighn as she started her count down. “Five… four… three… two… one!”